Scot is overhauling the website for our 7/7/07 launch and the procedure to enroll with One Book Shelf is underway. We'll have to see what's involved with jumping on to Your Games Now's bandwagon too. No new titles yet that I'm able to announce but my gaming group was doing some brainstorming last night for what people might like in terms of pdf buying and the player's perspective. Some good thoughts were hatched but we'll see where those lead later on.
Posted by Bret at 9:32 PM No comments: 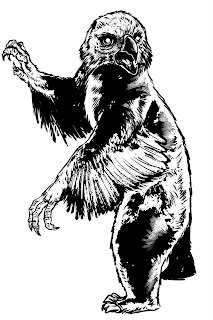 Here's a little preview of the Behind the Monsters: Owlbear pdf coming soon to an internet site near you!

An excerpt from the creation story: "As First Wizard, Ebrim was in charge of the creature’s conception. To formulate a suitably fearsome monster, the human mage looked to his own deepest fears. As a child, an owl attacked Ebrim and grievously wounded him. Even as an adult, the image of that owl and its bloodied beak gave Ebrim chills. But such a creature was not in and of itself worthy in a military capacity, he reasoned. Could that aspect he feared, however, be grafted onto a more suitable form? Ah, now Ebrim’s penchant for transmutation takes hold of his imagination..."
Posted by Bret at 3:25 PM No comments:

Will this be the mark of the Owlbear? Since 666 is already taken, perhaps we can start a new trend with the official startup date of Tricky Owlbear. :) We're gathering a few new art pieces and the logo for Behind the Monsters as well as a new logo for Behind the Spells from our talented friend Rick Hershey at Empty Room Studios. I'm putting the final touches on BtS: Vampiric Touch and BtM: Owlbear. Now, if only I can track down that Mike Ferguson guy and see how he's doing on Xorn and Bulette...
Posted by Bret at 6:49 PM 2 comments: