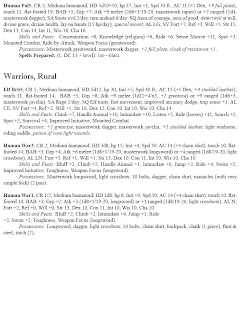 Someone on the Necromancer Games forum asked for a sample page from the new book so I figured I'd post it here as well.
Posted by Bret at 9:49 PM No comments:

Behind the Spells: Compendium 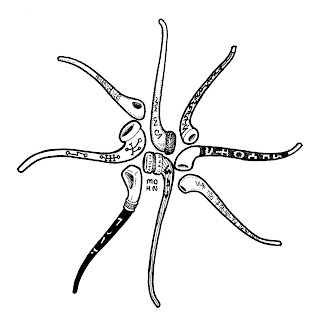 Artwork has been commissioned for this, our first print foray. Here's a sample by Jesse Mohn which is drawn from the Wish & Limited Wish issue.

Tricky Owlbear Publishing, Inc. presents Lotsa Blocks! for fantasy OGL gaming. Within this no-frills pdf are 103 ready-to-use stat blocks, sorted by role (warrior, sage, etc.), for the harried GM. No longer do you need to schedule an extra hour or two to come up with foes that will only live for a few rounds anyway. Let Tricky Owlbear do the work for you! Lotsa Blocks! gives you NPCs fashioned solely from the System Reference Document so there's nothing out of the ordinary you must stop and reference during play. Whether you need commoners to populate a community or the main villain for tonight's game, this is your go-to source. Have more fun more quickly with Lotsa Blocks!
Buy it from RPGNow here: http://enworld.rpgnow.com/product_info.php?products_id=50521
Buy it from YourGamesNow here: http://www.yourgamesnow.com/index.php?main_page=product_info&products_id=1876&zenid=fb296f773c59217ff7908ef872eaf499
Posted by Bret at 11:13 AM No comments:

The first review is in for Bulette! Check it out here: http://www.rpgnow.com/product_reviews_info.php?products_id=50385&reviews_id=15725
Posted by Bret at 8:49 AM No comments:

With 4e coming next May, I was curious to see how DMs handle an edition change for their campaigns. Thus, I posted this thread at ENWorld: http://www.enworld.org/showthread.php?t=207281

Besides idle curiosity, however, this thread is a bit of market research for an idea I had on Friday--a trilogy of campaign ending/changing modules. If, as I thought, DMs ended their current campaigns to start fresh with the new edition, then such a trilogy might be a good seller. According to the thread poll results, though, I might be mistaken. The option of picking up an adventure geared this way is dead last. Seems the bulk of the groups responding will continue as they have or the DMs in question are writing their own finales.

Even with the data, perhaps a single adventure fashioned to end a campaign would still have good customer response. I'll have to stew on this longer and get some of my Tricky Owlbear friends' opinions.

In other news, Tricky Owlbear is gaining sole rights to my Behind the Spells series. It's just easier than Ronin Arts figuring out the sales from sites we're not on (and vice verse for RPGNow). With that agreement, TO will be publishing our first print product--Behind the Spells: The Compendium. The first 36 issues were errated by me at the end of '06 and new material added for the print edition. We'll be releasing this first in pdf and then in print form hopefully by year's end.
Posted by Bret at 10:34 AM 2 comments:

Tricky Owlbear Publishing, Inc. is pleased to bring you the third release in the Behind the Monsters line, this one focusing on that most dangerous predator the bulette!
These pdfs follow a format similar to that found in the popular Behind the Spells series (also presented by Tricky Owlbear Publishing) so chances are good that, if you enjoy that series, this one will also strike your fancy. Each issue is narrated by Jadrin Nelv, monk of the Order of the Sacred Branch. Jadrin schools novice monks in the ways of the multiverse's creatures and we, the readers, get to listen in. Whether you're a player or a GM, you will find something of use within these pages. Includes two adventurer combat tactics, one new monster, and one new spell!